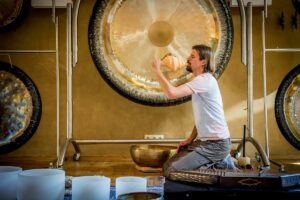 Tom has been working with Gongs, Singing Bowl Massage and Archaic instruments since 2001, when he began collaborating with Gong Master Don Conreaux during his first visits to Europe.

Later Tom took his own intuitive direction studying the knowledge from the Himalayas (Nepal and India) and combining the knowledge he learned over the years to provide rich in depth teachings.

Founder of Tone of Life ( Art for Peace) created in 2002 to deliver new possibilities and techniques  to work and help people through sound.

In 2005 he discovered and began to teach Singing Bowl Massage in the Water, which quickly became very popular all over the world. In 2006 Tone of Life team created Maitreyan Peace Celebration Gongs and next years with his partner several new types of the Gongs, known also as 4 Elements that are now used extensively in Gong therapy.  In 2006 Tom opened the first Peace Bell Garden in Krakow and in 2010 the second in Porabka at his ‘Sound of Nature’ retreat centre. In 2012 together with his wife Abby they lead a project to play the Gong for Southern Wright Whales in the town of Puerto Piramides on the Peninsula de Valdes in Argentina.

As a Musician,  Tom provides Concerts of expansive, meditative and trance music all over the world, using Gongs, voice and instruments from different part of the Universe. He has also made soundtracks and live acts for Theatre plays. Tom has recorded 8 CD’s with musicians from all around the world and Solfeggio Frequencies. He has dedicated his life to Sacred Tone Improvisation, helping and inspiring people from around the world to find the way to their heart.

London Gong Meditation
5.0
Based on 13 reviews

S G
21:09 26 May 22
I absolutely love Odette’s gong baths and grateful to have found her ‘coincidentally’ a while back now. It’s a magical experience every time I go, and I can honestly say that this is one for the Soul. Healing and wonderful.Thank you Odette.

Kezzier S
08:23 26 Apr 22
I came across London Gong Meditation on Instagram last year and I’ve been attending Gong baths in Camden ever since. I absolutely LOVE the sessions and how I feel after them. It’s the most relaxing practice that I’ve found - a truly blissful 75 minutes that I’ve struggled to get anywhere else ☺️ I always feel at peace, in tune with myself and ready to face the weeks ahead after a gong bath and I always have a wonderful nights sleep.You’re made to feel welcome, at home, and like you’re surrounded by friends from the moment you arrive at the studio. Everyone is always so friendly and each time I’ve attended, I’ve met lovely people downstairs whilst waiting to be let into the studio. My first Gong bath, I convinced a friend to come with me as I didn’t feel confident enough to go alone - I had a fear that I might have to do something that I didn’t know how to do and would look a fool - How wrong I was! The beauty of this practice is that you don’t have to do anything except relax and enjoy it! After my first session I knew I’d be able to attend my next session alone - and I haven’t looked back since. Odette is amazing and plays all of the instruments beautifully - Anyone thinking of giving Gong bath meditation a go, absolutely should 🙏🏼

E Scott
23:16 03 Jan 22
I bought the gong sleep meditation just before Christmas and have played it a few times over the holidays. I have found it really works as I have slept very well each time. It also feels deeply healing and the recording is a good length.

Maria
10:03 09 Sep 21
It is a very enjoyable experience, relaxing and definitely healing! I have a back injury that requires seeing my Osteopath regularly, she has been unwell in the last couple of months and turns out my now regular Gong baths are helping immensely! Thank you Odette Lightland

Amelia
18:14 11 Nov 20
Recently received a gong and sound bath by Odette. Being surrounded by these vibrations made my body feel kind of realigned afterwards. Very relaxing experience. I also enjoyed the variety of sounds throughout. Can only recommend the experience ☺️

Kieran Foley
21:00 19 Feb 20
This was my first gong bath experience and I really enjoyed it. Odette created an ambient space to lay and let the beautiful sound wash over you - so relaxing! I slept deeply afterwards and felt great the following day. Eye masks and mats were provided which really helped with getting into meditation during the session. I'll definitely be attending one of Odette's slightly longer events soon!
‹
›