We have an absolutely splendid venue for the Gong Bath/Concert and for those of you who like a bit of history, here’s some further information.

Link to a map of the location https://goo.gl/maps/gJJT2 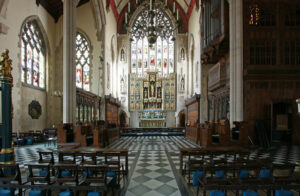 The acoustics are super and we are in Zone 1 near to the National History Museum.

Holy Trinity began its history as a chapel on Knightsbridge Green, attached to a leper hospital founded by Westminster Abbey, who to this day are patrons of the Parish. In 1629 the chapel had become so dilapidated that a petition was made to Archbishop Laud, when he was Bishop of London, for permission to rebuild.. It was granted and a new building arose on part of the land currently occupied by the Parkside block of flats, just west of Hyde Park Corner. Laud gave a silver Communion Chalice, still owned by our church, but now displayed in the Victoria and Albert Museum .

The chapel was rebuilt again in 1699, and renovated in 1789. A new church, Holy Trinity Knightsbridge, was erected on its site in 1861. A photo of its street frontage in April 1899 survives in our archives (seen in the organ document cited below). In 1901, it was demolished and transferred from its site in Knightsbridge to Prince Consort Road, where a new church was erected to the designs of G F Bodley and C G Hare.

Holy Trinity was a late addition to the churches of Kensington. In 1842, there were only three churches in the area of South Kensington: St Mary Abbots, Holy Trinity in Brompton Road, and St Barnabas, Addison Road. In the next 35 years, fourteen new parishes were established, the design and building of which involved many of the best Victorian ecclesiastical architects of the day. By the 1870s, most of these were completed. The move of Holy Trinity to Prince Consort Road took place in 1901, when a site was found to the south west of the Albert Hall, at that time just in Kensington, and the new church was planned as Holy Trinity Church, South Kensington. It still carries this title even though by 1901 the land had been ceded to Westminster in exchange for Kensington Palace, which at Queen Victoria’s behest had been moved from Westminster to Kensington.

What is special about this building?

Commissioning a church from the Bodley architectural practice often meant that you were going to get a church built in the 14th century late perpendicular style. Holy Trinity is no exception. It shows in the exterior facade, which is in this style and is said to bear a close similarity to the west front of Bury St Edmunds Cathedral.

But it is the interior that is outstanding, perhaps one of the finest examples of Bodley’s work. The loftiness and the lavish fixtures and fittings almost transport one back to the decorative condition of churches before the Reformation. “The tall slender piers of the nave and the wagon roof of the nave and chancel remind one of the great Perpendicular churches of the west country. Absolutely nothing is wanting, from the chequered marble floor to the statues filling the niches flanking the great east window.”

The interior is a showpiece of the very best ecclesiastical fixtures and fittings of the Edwardian era. All the major decoration in the church, including the reredos, the altar, the choir stalls, the stained glass, the pulpit, and the font, are designed by Bodley and created very closely to his original plans. After the death of Bodley in 1907, the work was supervised by Cecil G Hare, his business partner, who was also responsible for the design of the organ casing. Here then is a building of great wealth and most unusually for most town churches of that date, of great completeness.

Even in its 14th century Perpendicular style, at the same time it conveys an aura of the comfortable, wealthy, and confident years of the reign of Edward VII, with its pride in Britain and the Empire. This beautiful church is at the same time both an essay in Gothic and a church of its time.

A tour of the building

The reredos above the High Altar is Holy Trinity’s outstanding feature, designed by Bodley with Lawrence Turner as his carver. It is a large gothic triptych, lavishly gilded and painted, with a multitude of carved figures under elaborate canopies. The reredos depicts the crucified Saviour between the figures of the Virgin Mary and St John. On either side of these three main figures stand a pair of angels representing the angelic guardians of the four British Kingdoms, their four symbolic crosses at their feet.
Beneath the central figures is a representation of the Nativity, flanked by the Archangel Gabriel and the Virgin Mary, together forming the Annunciation; four more angels with musical instruments complete the tableau. The reredos is closed on Good Fridays to show the cross in red-brown against the green darkness, symbolizing the sky, making a dramatic contrast with the richness of the carvings seen during the rest of the year. Simon Jenkins in his book England’s 1000 Best Churches writes: “He may have designed grander pieces, but few more lovely. Were [it] not in a Church but a few hundred yards away from the V & A, crowds would daily sing its praises.”

The altar, artistically very much an integral part of the east end, is used at all main services, and is decorated with five panels surrounded by naturalistic foliage containing representations of the four Evangelists and a central panel depicting the Crown of Thorns surmounted by a royal crown.

The Lady Chapel lies to the liturgical north of the main altar. Here the screen and altar rails are carved by Lawrence Turner, following Bodley’s designs, as was the Flemish-style triptych with its central panel of the Adoration of the Magi. These were painted and gilded in 1956.

The choir stalls are part of the magnificent woodwork in the chancel and sanctuary designed by Bodley and carved in oak by Rattee and Kett of Cambridge.

The organ was erected in the old church by Brindley & Foster of Sheffield in 1897, and rebuilt here. In 1958–9 the organ was rebuilt by Rushworth & Dreaper. The case was designed by C G Hare in 1908–9 and built by Rattee and Kett of Cambridge. The considerable reverberation provided by Bodley’s design greatly enhances the organ’s effect. Much further detail concerning this beautiful instrument can be found in a report by our organist: Organ of Holy Trinity Church, Kensington Gore

The pulpit’s wineglass stem shape was designed by Bodley in 1904. It is decorated with the four Doctors of the church (St Ambrose, St Jerome, St Augustine of Hippo, and St Gregory), and the four evangelists. Its ornamental staircase has been judged as fine of its sort as any in England. The painting and gilding of the pulpit only took place in 1964, when Douglas Cleverley Ford was Vicar.

The font in the southwest corner was designed by Bodley in 1902, but his design for a towering font cover was never realised. A smaller font cover, designed byJohn Hayward and executed by Faithcraft, was provided in 1962.

The three chandeliers, which create such an impression as one enters the Church, were a gift of John Nicholas Fazakerley in 1909, and were erected in front of the altar, thus obscuring the reredos. They were moved to the centre of the church in 1989, when the church was rewired and extensive redecoration carried out. What was Bodley’s own scheme for illuminating the church, and why these magmificent chandeliers were donated just two years after Bodley’s death, are facts not known to the writer at the moment. Any new information that becomes available on these points will be updated here.

The Bodley memorial lies to the left of the Lady Chapel is made of red and white marble and was designed in the Jacobean style by Bodley’s pupil Edward Warren in 1910. The selection of this classical style in a Gothic church has been questioned, but the fact that this style was selected by someone close to Bodley suggests that the idea would have had his approval.

The tall seven-light [liturgically] East window above the reredos was designed by Bodley and well executed by Burlison and Grylls, although its real northern exposure prevents the viewer from seeing it at its best. For a detailed guide of the iconography, see Peter Kettle’s notes on the stained glass, always available at our bookstall.

The Lady Chapel, also ascribed to St Simon and St Jude, has two windows. In the East window, the main light illustrates the Virgin and Child. To the left there is a crown of thorns, below which St Simon holding a saw. To the right a circle of thorns, below which St Jude holding a club. The church was consecrated on the Feast of SS Simon and Jude on the 28th October 1903. The north Lady Chapel window again features the Virgin and Child surrounded by five female saints.

The East window at the end of the North aisle is to be found above the Bodley memorial. It features eight historical figures, called in the explanatory notes English Worthies: William of Wykeham, Sir Francis Drake, Sir Philip Sydney, Geoffrey Chaucer, Henry Purcell, Rahere (the founder of Bart’s Hospital), William Harvey, and William Caxton.

The windows alongside the North aisle and the two side windows on the West wall are memorials to members of the congregation and two of Holy Trinity’s vicars: the first vicar, Henry Bartholomew Coward, and James Owen Hannay, (1930–1950) , who was also a novelist writing under the pseudonym of George Birmingham. The Hannay window is the only one in the church not executed by Burlison and Grylls.

The central West window of the nave is a spectacular object, designed and executed by Thomas Henry Grylls in a vigorous early Renaissance manner. It is known as a war memorial, although there is no dedication in the glass to this effect. Its depictions of Old Testament heroes and warrior saints, the crests of the dominions of the Empire, and a mighty advancing army, form an almost visual depiction of the hymn Onward, Christian Soldiers. The scene at the top bears considerable resemblance to the Benozzo Gozzoli frescoes in the chapel in the Palazzo Medici-Ricardi in Florence.

The brass lectern in the form of an eagle standing on a globe, which in turn is supported by an ornate pillar supported by flying buttresses, is well worth a look. We have no information for when it was installed in the church, but there is every reason to suspect it was supplied by Watts & Co.