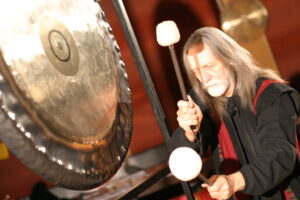 Don is the originator of Gong Yoga, The Gong Bath, Gong Therapy, Gong Puja, Gong Master Training, the Global Gong Network, the Global Gong Mantra Sutra, and he is conductor of the Mysterious Tremendum Syntonic Ensemble, as well as, the designer of Starhenge World Peace Bell Gardens. There are now two Starhenges in Poland, one in the U.K., another one in Portugal and another in the state of Kansas, U.S.A.

He has been travel extensively since 1984 and today hundreds of his Way of the Gong students are doing Gong Work and World Service in many countries around the world.

His gong teachings are now being presented in an accredited course at the College of Sound Healing in the United Kingdom.

For the past 40 years, Don Conreaux has brought the mystical and entertaining sounds of the ancient bronze gong (tam tam), bells, bell bowls, shofar and the spiral sea horn (conch) to millions of listeners around the world. He has appeared on numerous television and radio programs as performing artist and talk show guest, holds 2 degrees in Theater Arts. Mr. Conreaux has worked throughout his career in theater, in both film and television in Hollywood as an actor, writer, and director before arriving in 1984 to NYC.

“The bronze gong has since ancient times been thought to exemplify the sounds of the universe; the sacred conch suggests the sounds of whales, elephants, dolphins, and wolves.” These sounds summon the forces of nature,” offers Mr. Conreaux. He is a genuine Gongmaster, as well as artistic director of The Mysterious Tremendum Consort and School of Sacred Sound. Previously he performed as an original member of One Hand Clapping, the Tibetan Singing Bowl Ensemble.

Don Conreaux tours worldwide, offering instruction, discourse, retreats, and full-evening concerts. Promoting the gong and its direct relationship to stress reduction and subsequent healing. The role of tone vibration is underscored as a tool for expanding awareness and global unity. Conreaux teaches the art and science of the gong, sacred conch playing, archaic polyphonic chanting and several other ancient tone producing instruments with The Mysterious Tremendum School of Sacred Sound and Intuitional Gong Yoga is “a school without walls”.

“The thrust of my work is to demonstrate and explain the importance of the ancient gong in today’s world, not only through the diversity of its powerful entertainment value, but by introducing its philosophy, relevance, and application to musicians, therapists, scientists, educators and the general public.”

As a writer, actor and director in theater, Mr. Conreaux was greatly influenced by Alice A. Bailey’s Esoteric Sound Healing, as well as Gene Youngblood’s writings on the subject of visually induced synesthesia. In 1969 he produced and directed the first of his “Concerts For Humanity” which was called The Divine Union, where he used for the first time, the ancient bronze gong with its powerful ‘layering tones’.

Theatrically he was impressed by Gratowsky, and musically marked by composers Rudhyar and Scriabin.

While on a Gandhi Salt March across the US, he met Robert Muller of the UN and was struck by Muller’s First Day of World Peace Concept and the simultaneous ringing of the multitude of gongs and bells on our planet.

Conreaux’s interest in ancient geomantic power-points, sacred geometry, and the inherent power of social rites, such as musical ceremonies using recycled implements of war, brought on the vision of designing special acoustic spaces utilizing principles of ‘functional harmony’ which empower the collective mind to cooperate non-violently with each other.

Most significantly, his Mysterious Tremendum Syntonic Consort can also be understood as a resonant tribute to Dane Rudhyar and to Russian composer Alexander Skriabin’s vision of a ‘Mysterium’ in which he attempted to “re-tune the world”.

London Gong Meditation
5.0
Based on 16 reviews

Gary Mitchell
13:18 30 May 22
Beautiful, relaxing, serene and surreal, Odette is a genius! my first gong bath experience and I was made to feel totally at ease, one hour and fifteen minutes of pure bliss, I can't recommend highly enough

S G
21:09 26 May 22
I absolutely love Odette’s gong baths and grateful to have found her ‘coincidentally’ a while back now. It’s a magical experience every time I go, and I can honestly say that this is one for the Soul. Healing and wonderful.Thank you Odette.

Kezzier S
08:23 26 Apr 22
I came across London Gong Meditation on Instagram last year and I’ve been attending Gong baths in Camden ever since. I absolutely LOVE the sessions and how I feel after them. It’s the most relaxing practice that I’ve found - a truly blissful 75 minutes that I’ve struggled to get anywhere else ☺️ I always feel at peace, in tune with myself and ready to face the weeks ahead after a gong bath and I always have a wonderful nights sleep.You’re made to feel welcome, at home, and like you’re surrounded by friends from the moment you arrive at the studio. Everyone is always so friendly and each time I’ve attended, I’ve met lovely people downstairs whilst waiting to be let into the studio. My first Gong bath, I convinced a friend to come with me as I didn’t feel confident enough to go alone - I had a fear that I might have to do something that I didn’t know how to do and would look a fool - How wrong I was! The beauty of this practice is that you don’t have to do anything except relax and enjoy it! After my first session I knew I’d be able to attend my next session alone - and I haven’t looked back since. Odette is amazing and plays all of the instruments beautifully - Anyone thinking of giving Gong bath meditation a go, absolutely should 🙏🏼

E Scott
23:16 03 Jan 22
I bought the gong sleep meditation just before Christmas and have played it a few times over the holidays. I have found it really works as I have slept very well each time. It also feels deeply healing and the recording is a good length.

Maria
10:03 09 Sep 21
It is a very enjoyable experience, relaxing and definitely healing! I have a back injury that requires seeing my Osteopath regularly, she has been unwell in the last couple of months and turns out my now regular Gong baths are helping immensely! Thank you Odette Lightland

Amelia
18:14 11 Nov 20
Recently received a gong and sound bath by Odette. Being surrounded by these vibrations made my body feel kind of realigned afterwards. Very relaxing experience. I also enjoyed the variety of sounds throughout. Can only recommend the experience ☺️

Kieran Foley
21:00 19 Feb 20
This was my first gong bath experience and I really enjoyed it. Odette created an ambient space to lay and let the beautiful sound wash over you - so relaxing! I slept deeply afterwards and felt great the following day. Eye masks and mats were provided which really helped with getting into meditation during the session. I'll definitely be attending one of Odette's slightly longer events soon!
‹
›